World of Darkness with miniatures and battlemap?

This is a thing I have thought sometimes, does any WoD/Storytelling player use miniatures or battle maps. I came to a conclusion, that no. Surely in some action based scenes and fights people certainly use some kind of game marks and maps to point positions, but playing it like miniature strategy, no.

Then I started to read Werewolf: the Apocalypse and found, that there is in rules actually lite rules for miniature fights with World of Darkness rules. They are basically the same you use with regular play, only with addition for grids, facing, movement etc. rules specifically used in miniatures.

I thought it a bit and was "yeah, why not". Actually, rules did not differ from regular Storytelling rules, there was just addition to move those little guys on grid, but I thought, as I love Storytelling rules in general above all, why wouldn't it be good for miniatures also?

They are enough simple so action will be fast. Also only imagination is a limit what characters can do thanks to that simple system. Also all manouvers used in minis are used, like aiming, hand-to-hand etc.

I started to think about it and realized, as I like WoD and have played miniature games in the past (mostly Necromunda) and enjoyed them back then, why cannot mix game I like the most with miniature battles.

To think about it, two teams, Vampires versus Werewolf for example. And werewolf characters in wolf or near-wolf form could be used from several fantasy miniatures, for human-form-werewolven and vampires you can use many modern or near future characters. There is lots of ready obstacles, but they are also quite easy to make yourself from household items and used packages.

Would be pretty cool, to have some fight with miniatures based on city or chronicle what you have been roleplayed in. Vampires vs. Werewolves, Sabbat vs. Camarilla.

Links to this post
Email ThisBlogThis!Share to TwitterShare to FacebookShare to Pinterest
Labels: Werewolf: the Apocalypse, World of Darkness 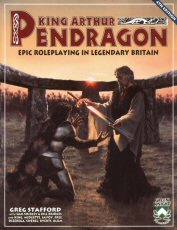 I got today my new games and retrieved them from post office. Bought them via roolipelit.net forum.

For first I was intentend to buy only Werewolf: the Apocalypse, but also got Pendragon on the top of that. I am very pleased with the deal. Thanks to the seller.

I was very excited when coming home with the box and opening it. First I got Werewolf on my hands and it looked really cool. 2nd edition it is, with purple cover and that scratch on top you can see through in inner page.
Pendragon was a real surprise. I definately have had it on my hands, I must have had it I don't doubt it but also don't recon it, so it looked so thick... and big. When I started to check it out I was awed. So full of information, propably historically quite accurate also (according to bibliography). Several pages without rules just fluff for game, not so bad pictures (nor great either). Surprise was also that publisher of Pendragon is Chaosium what for me has a reputation of quality games (for example Call of Cthulhu). Second surprise was that cover art is made by a guy named Stephen King! I am not sure, is it the same King as my favourite horror author, or just a random guy with same name. But it is pretty cool still.

So, just got yet again two more games in my collection. Werewolf what I have been wanting for many many years and Pendragon, what was really a positive surprise.

Links to this post
Email ThisBlogThis!Share to TwitterShare to FacebookShare to Pinterest
Labels: Pendragon, Random talk, Werewolf: the Apocalypse

V:tM - From idea to character

In last post I posted that not so serious discussion about new Vampire-character, and actually after joking about it we took a bit more serious aspect on it and actually, kind of had an idea for new vampire few-shot (one shot with few sessions ;) )

So, character will be assasin, from clan Assamite. But game starts where she is held captive, and all her memories are wiped out. She has no idea what has happened, where she is etc. So, game basically starts like this cliche action movie, but it is the purpose of the game. Action and fun.

Character is Assamite, who cannot remember who she is, who did she work for, where she is or why is she held captive. I first thought, that basic Vampire character creation for starting characters is a bit too low. I wanted player to have this character, what is really a capable assasin and can easily kill like 10 normal mobs without even getting seriously hurt. So, I decided to add points to character sheet for the player as I saw how it will fit, not based on any pre-written amount of dots to spend.

I know, character is a bit overpowered, but if we start to play this capable assasin, she should be cool and tough and skillful character, not a noob. We aren't intended to start play from 13th generation starting noob, and play untill she has diablerised enough baddies (or good guys) to lower her generation and gained enough experience points for delivering packets to be capable killer. Nah, I wanted to start straight away from the fun part, not start playing pre-fun part (to develope character by missions/quests/what ever to get to fun part...)

I haven't yet calculated how much character is already worth of xp, but will do it. To be honest, character isn't yet fully ready, as I am reading currenlty Player's Guide to Sabbat (in rpg.net) book for some neat new disciplines, merits, paths and such stuff. So, after I find out is there some really neat stuff in that book I could use in this character and chronic, I'll calculate how much the character is worth of points.

When I storytell (game master, what ever) I usually don't plan that much for the game, but mere go with the flow. Game developes while playing it, it is not pre-written adventure I am reading for player(s). But this time, I thought I'd write or plan some kind of starting point and ending. But I will keep the rest a bit open, so there is several ways to go to the end. It will involve betraying, action, assasination, all the good stuff great movies are made of. I will watch some movies for inspiration, I think anime will be big part for that.
This is not going to be dead serious vampires sitting around table and talking all night long Camarilla politics. No, this will be assasination action play with all awesome and cool stuff, and yeah, there will be blood, and vampires. You know, like some stupid teenager's or anime nerd's wet dream. This won't be regular World of Darkness vampires, no, but this will be damn awesome anime styled bloody action! With vampires. And ninjas, and machine guns. This will be so awesome!

I am sure, that V:tM rules will work just fine for this game. Even, if V:tM rules has been quite much discussed about how good or broken they are, for me they are neat. One of best rules there is, I even like oWoD rules way much more than nWoD rules. Don't know why is that. Call me fanatic, call me stupid, but old World of Darkness rocks! And now I will see, what kind of will be to play awesome Vampire: the Masquerade, but put more awesomeness in it. It will be like, double-awesome!

Ok, I still haven't had time to read W:tF because of difficulties in real life (for example dog got sick) but I miss roleplaying. We did rpg almost every night after all duties done. So, there has been a big gap in our evenings. I thought, we might make a Vampire: the Masquerade character as both of us are really familiar with that game to entertain us untill I finish reading W:tF and we can continue that.

She wasn't so excited on creating a character, so as a joke when we talked about it I told her, that she could play a Brujah homosexual embraced in 80's with leather cap, pants and vest and all that stereotypical gay-culture stuff... After it I went to other room and we continued to discuss in msn. Here is what we talked about (yes, even if we both are finnish we did talk originally in english, so this is not a translation):

[20:08:56] Astro-Vampire says:
so what will we does? no vamps cos u too lazy to colour dots and my pre-made character wasn't good enough for you *-)

[20:10:33] Astro-Vampire says:
ok, this one is assamite. really exotic and sexy with not much on her. only little pvc bikinis. she has also katana, she doesn't talk much but kills and sexes even more! she is lethal and flirty and kills and kills yey

[20:11:17] Astro-Vampire says:
she knows assamite stuff quietus, celerity and obtenebration so she is like this fucking killing machine!

[20:12:21] Astro-Vampire says:
and she does jobs for vamps who wanna get rid of someone, but she also kills those who employ her, cos she doesn't like taking orders. and oh oh she leaves used tampone on the scene! so ppl know it was she who killed that vamp. "Bloody tampone on the night, they whisper and shiver."

[20:14:12] Astro-Vampire says:
and she has lesbian girlfriend who is fairy :D changeling fairy.

[20:14:53] Astro-Vampire says:
ok, but that contract killer part with all those awesome super powers and tight outfit and katana