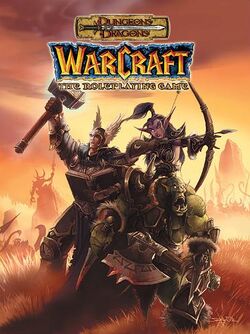 Months back at one rpg forum there were few Warcraft sourcebooks for D&D3 for sale. I considered for some time if I'd buy them, but decided not to because of current financial status. I could have afforded them easily, but thought do I really need them.

I decided, that I don't need them at that moment. As playing D&D in homebrew setting was easy enough. Still, I think that for me Warcraft supplement for D&D could be the official setting I'd enjoy Dungeon Mastering.

Why WoW Over Everything Else?


Well, not sure if over everything else in setting selection, but it would rank high. Reason is, that Warcraft universe is familiar enough thanks to Warcraft RTS games. Also, I have played World of Warcraft MMORPG and liked it. That's enough familiar to adapt the feel of Warcraft universe to rpg campaigns. And I like that Warcraft is not whacky and totally different fantasy setting, even though it has its own flavor in it.

I have many rpg books to read and Forgotten Realms campaign setting as not being interesting enough and being large feels a bit too much time consuming just for adapting a fantasy setting to run. I think that Warcraft would be more easy to learn and read as I find it interesting overall.

Why Not Buy Then?


I have several other books I want, and I'd rather buy those than expand my D&D collection what I don't use regularly. But if I had good enough great deal, yeah, why not. But still, there are maybe even more interesting settings for D&D like Dark Sun and Planescape.

At Amazon.com (link to the right) it's not that bad price at the moment.