Many faces of vampires

Vampires. Stalkers of the night, feared by commoners but romanticed by poets. Monstrous bloodsuckers, beautiful seducers or elegant lords. What do they live from, where does their condition come from and what are their motives? Vampirism is a condition that is spreading through a bite. Folklores are right. You get bitten by a vampire, you turn into one. There is no magic, mystery or curses, just a dicease that catches when diceaseds saliva catches your blood.
What does this condition do to you? When people have urge to eat something, they have a shortage of some nutrient. Vampire dicease is killing hemoglobine what makes your body to want fresh blood to cover the loss. Animal's blood will do ok, but best source to replace bloodcells vampire dicease is eating away is to get human blood.
These vampires don't have pointy fangs, but they use other means to get blood using sharp tools for it. They may get a trusted person(s) to donate them blood, or they might have to seduce their victim. Unlucky one's must take it by force.
This dicease is a hard one in middle-ages. You cannot tell about it, as it might be viewed as curse and blashemy. If you told it, you would be quaranteed in fright of contagious dicease.
You are a loner with your illness and you must hunt your pray. Even if it is taking the blood against another's will or not. After all, it would be suspicious if you did buy big amounts of animal blood from butcher.

Curse of Cain, curse of being evil, corpse will walk and drink blood as a blasphemous act for Christ's blood. Cursed vampires are driven by their instinct, if you can call it that. They do it, because they are doomed to do it. Is it god what created this monster, or was hell already full. Or was the vampire so evil person when living, that he came back to continue his terror?
Best way to prevent evil person to come back from the grave every night to pray on human blood is to hit a stake through his heart, chop his head off and stuck his mouth with garlic. But if you didn't prepare the body right and it is now a vampire, you better find it's lair before it is too late.

Betrayed. Hated. Despised. He will come back for a revenge. He is terror who stalks night taking his revenge bite by bite. Or maybe a witch did her spells and when he died evil granted him an eternal life as a blood sucking thing beyond grave. No blood is enough, no suffering is satisfying. 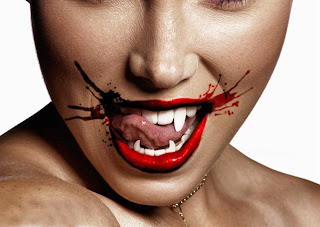 Usually vampires drink blood to noursih themselves. Blood is the essence of life, what keeps vampire's unliving body functioning. Blood must be living from a living person. Animal blood can do for a short time, but older you are, less you get from soulless blood of animal kingom. You need blood from a being you once yourself was.
At some point hunger has grown so great, you cannot resist to take a sip or two, but start to drink people dry. Then rumours start to roam. To survive, you must be intelligent, witty, cunning. If you live long enough, you start to build your own reign of terror. You are a rumour for outsiders of your village, but for villagers, you are a nightmare. Maybe people start to be too scared against your power you have built to try to kill you. Maybe people even offer you sacrifices of travelling men to offer blood to satisfy your hunger so you will leave them alone for another night. But your power has a cost, your reputation stretches wide.
Those who aren't intelligent, witty and cunning enough are doomed to be slain again. This time for good.

Not all vampires lust for blood. Some take your life essence feeding your very soul. You don't necessarily know you have been feed, you just feel a bit down, your moral is low. You are tired. You cannot spot psychic vampires as they look the same. They even might have aura that comforts you. But that aura is just a discuise, they are not pleasant persons with high empathy, they use it to get your trust, and drain your essence.

Sexual vampires, or incubus (for male) and succubus (for female) get their power from lust. You hardly can be loved by a sexual vampire, because only thing they are after is your body. They use you, even if you willingly give yourself to them. You are a source for their energy, maybe a toy. But never a lover. You give them energy by making love, they drain you. You might even fall in love with them, but they have several victims. If you don't get rid of incubus or succubus, they will destroy you. You feel used, dirty, maybe even envious and it will destroy you.

Vampires who maintain some intelligence, can even go by as a human. They might look human, more or less strange or twisted in a funny way you sense but don't see. Some of them who aren't intelligent enough to cover themselves but are only after their hunger are more revealing and short aged than those with higher wits and influence. Vampires what are not more then rabid beasts are easily spotten, as they usually don't try to hide themselves.
For a vampire, blood or else where they get their power and nutrition from is all what matters. Everything else comes second. They are predators with eternal hunger. They might play with you, build social network and enjoy balls, or even build their castle but behind that all is a monster. It might be conscious choise or subconscious instinct to use these matters to cover their true nature.

Vampire can be a beggar in the street, as in poors district it is easy to hunt. No one in authority or status will miss your victims. Or you might take your higher class life back, or use your cunning powers to rise high. It doesn't matter do you live in sewers or castle, you hunt and people you associate with are your pray.

Vampire might enjoy his solitary life, or being a center of attention.

How to give flesh for vampires? In White Wolf's Vampire Storytelling games vampires drink blood. They have their own undead society what is described as clans and sects or covenants. But when creating your character, give a second and a third think for their no longer mortal life amongst the people. To freshen up Vampire: the Masquerade or Requiem, decide that your character can be sexual or psychic vampire instead of blood drinker. It makes things a bit different. It could be a great flaw for (oWoD) clan Ventrue.

In fantasy games vampires are usually monsters player characters slay like any monster in Monster Manual (or similar). Make vampires more than just stats and that evil dude at place X you need to slay for a quest. Make vampires scary predators in the streets, or horrible beasts at countryside. Or a count, cunning and influentic.

Use your imagination. Vampires might be a bit boring, but make them interesting.

I'd like to have your ideas of different kind of vampires in comments!

Email ThisBlogThis!Share to TwitterShare to FacebookShare to Pinterest
Labels: Horror - Rules and material